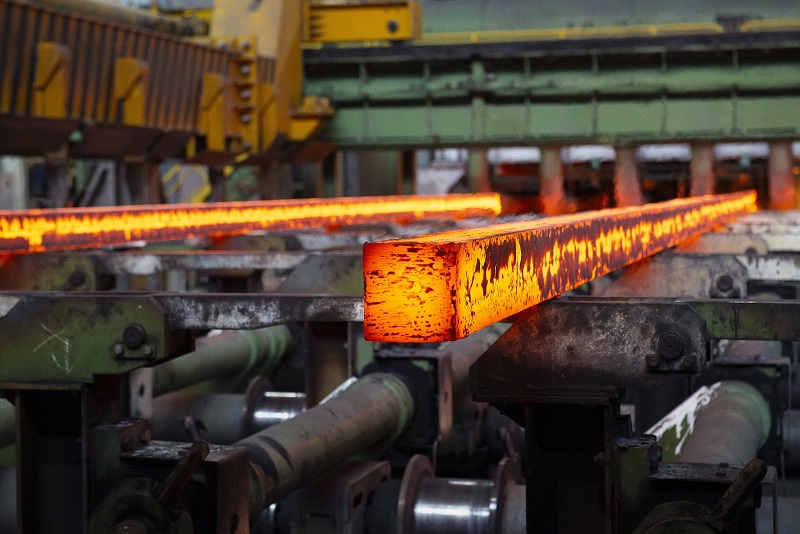 Steel is an alloy of iron usually containing less than 1.5% carbon. Steel can be cast into bars, strips, sheets, nails, spikes, wire, rods or pipes as needed by the intended user.

Steel making process  at an integrated steel plant involves three basic steps. First, the heat source used to melt iron ore is produced. Next the iron ore is melted in a furnace. Finally, the molten iron is processed to produce steel. The fuel source is often purchased from off-site producers.

Steel is made by the Bessemer, Siemens Open Hearth, Basic Oxygen Furnace, Electric Arc, Electric High-frequency and Crucible processes. In the former steel making process, molten pig iron is refined by blowing air through it in an egg-shaped vessel, known as a converter.

In the Siemens process, both acid and basic, the necessary heat for melting and working the charge is supplied by oil or gas.

Heat is frequently transferred from one oven to another to reduce energy requirements. After the coke is finished, it is moved to a quenching tower where it is cooled with water spray. Once cooled, the coke is moved directly to an iron melting furnace or into storage for future use.

During iron making, iron ore, coke, heated air and limestone or other fluxes are fed into a blast furnace. The heated air causes the coke combustion, which provides the heat and carbon  sources for iron production.

Limestone or other fluxes may be added to react with and remove the acidic impurities, called slag, from the molten iron. The limestone-impurities mixtures float to the top of the molten iron and are skimmed off, after melting is complete.

Sintering products may also be added to the furnace. Sintering is a process in which solid wastes are combined into a porous mass that can then be added to the blast furnace. These wastes include iron ore fines, pollution control dust, coke breeze, water treatment plant sludge, and flux.

Molten iron from the blast furnace is sent to a basic oxide furnace, which is used for the final refinement of the iron into steel. High purity oxygen is blown into the furnace and combusts carbon and silicon in the molten iron. The basic oxide furnace is fed with fluxes to remove any final impurities and alloy materials may be added to enhance the characteristics of the steel.

The resulting steel is most often cast into slabs, beams or billets. Further shaping of the metal may be done at steel foundries, which re-melt the steel and pour it into molds, or at rolling facilities, depending on the desired final shape.

Cokeless iron making procedures are currently being studied and, in some places, implemented. One such procedure is the Japanese Direct Iron Ore Smelting (DIOS) process. The DIOS process produces molten iron from coal and previously melted ores. In this process, coal and other ores can produce enough heat to melt ore, replacing coke completely.

A final coke less iron melting process is the Corex or Cipcor Process. This process also manipulates coke to produce the heat required to melt iron. A Corex plant is operational in South Africa. Korea has a Corex plant operating at 70% capacity in 1996, expected to continue in progress.

The process integrates coal desulfurization, has flexible coal-type requirements, and generates excess electricity that can be sold to power grids. Further testing is being conducted in the U.S to determine commercial feasibility.

Iron carbide production plants are an alternative to the Basic Oxide Furnace. These plants use iron carbide, an iron ore that contains 6% carbon rather than 1.5-1.8% of regular iron ore. The additional carbon ignites in the presence of oxygen and contributes heat to the iron melting process, reducing energy requirements.

This involves melting scrap metal, removing impurities and casting it into the desired shapes. Electric arc furnaces (EAF) are often used. The EAF´s melt scrap metal in the presence of electric energy and oxygen.

The process does not require the three step refinement as needed to produce steel from ore. Production of steel from scrap can also be economical on a much smaller scale. Frequently mills producing steel with EAF technology are called mini-mills.

EOF was developed to replace the electric arc and other steelmaking furnaces. The Electric Oxygen Furnace (EOF) is an oxygen steelmaking process. Carbon and oxygen react to preheat scrap metal, hot metal and/or pig iron.

After the molten metal is released from the BOF, EAF or EOV, it must be formed into its final shape and finished to prevent corrosion. Traditionally, steel was poured into convenient shapes called ingots and stored until further shaping was needed.

Current practices are continuous in casting methods, where the steel is poured directly into semi- finished shapes. Continuous casting saves time by reducing the steps required to produce the desired shape.

After the steel has cooled in its mold, continued shaping is done with hot or cold forming. Hot forming is used to make slabs, strips, bars or plates from the steel. Heated steel is passed between two rollers until it reaches the desired thickness.

Please feel free to reach us https://aqcinspection.com/training/ to learn more about any of the methods in detail.

Visit our technical and career updates at our Blog site https://advancedqualitycentre.blogspot.com . or